Home Creste Kids UP, Up and Away! 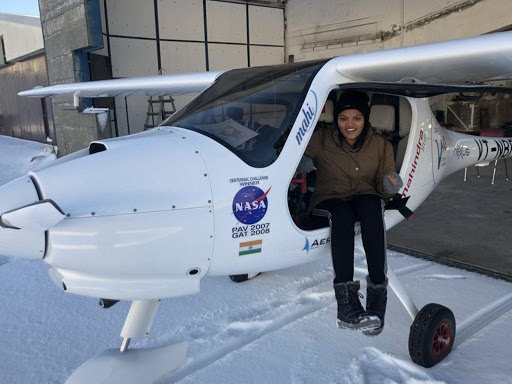 Aarohi Pandit, a 23-year-old pilot from Mumbai, India has set a new record on May 13, 2019, becoming the first woman to fly a plane alone across the dreaded Atlantic Ocean. The light plane named “Mahi”, Aarohi flew is a light sport aircraft (LSA) weighing no more than just 400 kilograms with its wings spreading out to 49 feet (15m). This little two-seater airplane is smaller than most other planes and shorter than the average human.

This is the first milestone of a much bigger plan according to Ms. Pandit as she endeavors to cover the entire globe flying in her LSA. She was initially joined by her friend and co-pilot, 24-year-old Keithair Misquitta. The two zestful girls are flying for a cause, to raise money for a foundation called “WE”. They even have the slogan, “Save the girl child, Educate the Girl Child” painted on the side of the craft. The organization stands to empower and uplift underprivileged girls and women. They ventured out on this trip on July 30 last year, starting out from India through Pakistan, Iran, Turkey, Serbia, Slovenia, Germany, France, and the U.K.

The LSA has to fly low which makes flying in mountain areas very difficult as it gets extremely cold in the craft, tough wind pressures require the plane to be as light and maneuverable as possible. Since the journey across the Atlantic required emergency gear and a raft there was only room for one pilot hence Ms. Misquitta got off and Ms. Pandit carried on alone as she took off from Wick airfield, Scotland making stops at Iceland and Greenland along the way. She landed at Iqaluit, Canada on May 13 in the morning. Rejoined by Ms. Misquitta, these supergirls intend to finish up the last two legs of their world trip and return to India by July 30 which would make it a year since their departure from their homeland